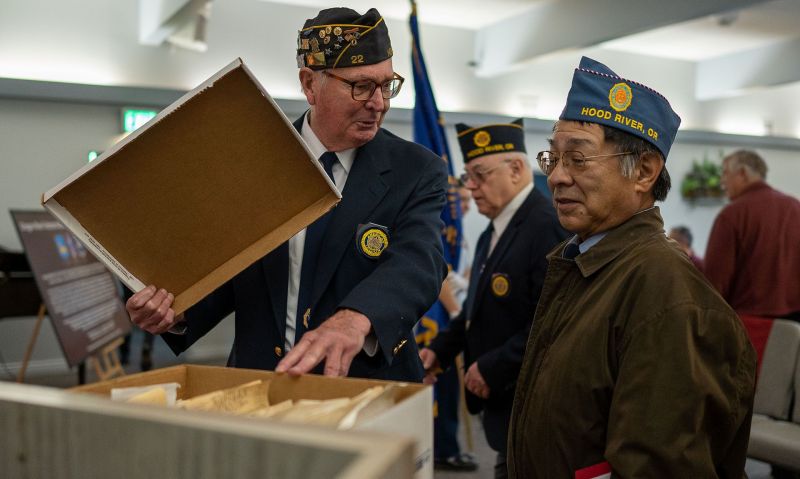 American Legion posts across the nation used Nov. 11 to honor veterans both living and dead from their communities. But in Hood River, Ore., members of American Legion Post 22 used Veterans Day to both apologize and bring about healing in its community.

At the Anderson Tribute Center, members of Post 22 gathered with the community to note discriminatory actions against Japanese American World War II veterans decades ago, apologizing for those actions and honoring the descendants of those discriminated against.

More than 400 Nisei – second-generation Japanese Americans – from Oregon served during World War II; their names are featured on a plaque at the Hood River County Courthouse. On Nov. 29, 1944, members of Post 22 went to courthouse and blacked out the names of the 16 Japanese Americans still fighting overseas for the United States.

“It just seemed like acknowledging and trying to move forward was something that we ought to do,” Post 22 Commander Carl Casey said. “Even though it’s really only rhetoric at this point – we can’t change anything – but with the local people from the Hood River area, it would be something that Post 22 could do to help with that healing process by at least acknowledging what had taken place, who really did it, and then trying to move forward, building our community more around love and respect that what it was in the past.”

Descendants of those Nisei who served in World War II attended Post 22’s ceremony. “We are here to thank Post 22,” said Gary Akiyama, the son of Japanese American World War II veteran George Akiyama, during the ceremony. “Two of the hardest things to do in life are to ask for forgiveness and say ‘sorry, I blew it.’ This is a significant move. We are eternally grateful.”

Casey said he’s seen multiple photographs taken at the ceremony that showed emotional reactions from those in attendance. “I thought to myself, ‘I think it made even a bigger impact than I thought,’ based on some of the emotional responses that I saw,” he said. “And this wasn’t about me or Post 22. It’s about doing what’s right for the Japanese community.”

“I thought, ‘If they made resolutions back then, maybe we can make resolutions to rescind,’” Casey said. “It kind of went from there, and it grew in perspective.”

The following are just a few more ways American Legion Family members commemorated Veterans Day. Please remember to share how your post or Legion Family observed the day at legiontown.org.

In Sierra Vista, American Legion Riders Chapter 52 led off the Veterans Day parade and ceremony. Afterward, the chapter conducted a Veterans Day Honor Ride on Fort Huachuca to honor our veterans and to cultivate positive relations with the local military community.

In Canton, around 100 people gathered at American Legion Fairgrounds for Post 45’s annual event, which featured a full military display with veteran memorabilia including uniforms, helmets, equipment and weapons, photos, newspapers and more.

After a two-year hiatus because of the pandemic, Veterans Day returned to Northbrook with a ceremony at Northbrook Junior High led by members of George W. Benjamin American Legion Post 791. The post has teamed with the school for at least 30 years for the ceremony.

“Veterans Day is a day for every American, every citizen – no matter what race, religion, political affiliation – they might have to contemplate the price of these liberties," Post 791 Commander Tom Kittler said during his speech. "It's a day to celebrate the courage, the deeds, the sacrifices, the dedication, the commitment of all our veterans who have served this great nation."

In Crown Point, American Legion Post 20 teamed with the city for a Veterans Day ceremony at the Lake County Courthouse. The ceremony included remarks from a Gold Star father, as well as a reminder of the issue of veteran suicides from Post 20 Commander Kevin Dvorak.

"Some veterans value courage, and it takes courage to ask for help," Dvorak said. "We must be more proactive, ask and encourage veterans to seek help before they pass the point of no return."

·       In Fort Kent, American Legion Post 176 Sergeant-at-Arms Leroy McKenzie visited Fort Kent Elementary School to show students how to salute and some basic facts about the American flag, including the proper way to fold it. He also spoke at Fort Kent Community High School/Valley Rivers Middle School, talking about both the importance of veterans and the issue of veteran suicides.

·       In Boothbay, American Legion Post 36 hosted a Veterans Day ceremony that was followed by a flag disposal. Post 36 Commander Robin Ford noted that, “In time of peace we can use the ennobling virtues of war and put behind us its ugliness and suffering. In peace we shall go forward together to scale new heights of achievement in unity of purpose, in sacrifice for the common good, in tolerance for those of different faiths and creeds, in bravery to fight for social and economic gains, and in the discipline of good citizenship. We shall move forward in the sight of God as a strong nation in a peaceful world.”

·       In New Providence, American legion Post 433 conducted a ceremony that included remarks from Mayor Al Morgan and members of the post. “Today is the day to remember the service and sacrifice of our veterans, especially those who have returned from war and continue to fight the battle daily on our shores,” Post 433 First Vice Commander Terrance Grossman said. “Please pray for their recovery.” Following the ceremony, attendees were treated to lunch.

·       In Somers Point, members of American Legion Post 352 and others gathered outside the post on Veterans Day to unveil a new monument honoring Medal of Honor recipient Oscar Schmidt Jr. Members of Schmidt’s family attended the unveiling of the monument, which Post 352 helped fund.

In Silver City, American Legion Post 18 hosted a packed Veterans Day ceremony and meal. Post 18 Commander David Morrison delivered remarks during the ceremony, which included an explanation of the POW/MIA table, music, guest speakers and a story about how Winnie the Pooh creator. A.A. Milne was a World War I veteran who wrote his stories to deal with his post-traumatic stress disorder.

“Today, we remember our veterans,” Morrison said. “Those who have fought, those who have served and the families who have helped us serve. … A veteran is a person who fell in love with their country, for better or worse, sickness and health.”

During the ceremony, H-E-B’s Jerry Johnson presented Post 828 with a $5,000 donation in support of the post’s annual Project Shoes program, which raises funds to purchase new shoes for high school students in the area.

Rain moved the annual Veterans Day ceremony at Culpeper National Cemetery to American Legion Post 330, where nearly 200 people were in attendance. “It is really a heartfelt issue for me, the community takes the time to come to recognize, appreciate, celebrate and really understand what the veterans contribute to their community,” American Legion Post 330 Commander Lori Medley told the Culpeper Star Exponent. “The places and situations that they put themselves in to defend our county’s way of life that people take for granted. Once you’ve lived in these other countries and come home, it’s such a different experience to come home.”

In Rock Springs, American Legion Auxiliary Archie Hay Unit 24 continued a six-year tradition by providing the family of the first baby born on or after Veterans Day with a special gift basket. This year’s gift basket included a handmade quilt and crocheted jacket, a baby bathtub, bottles, books, rattles, a custom crocheted teddy bear and more.