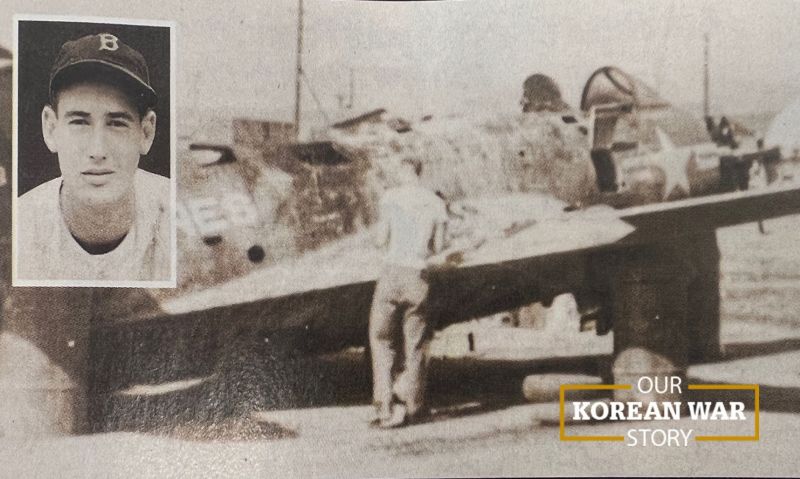 Submitted were many aspects of the war that were never reported in the media nor documented anyplace else, including:

“I entered the Air Force in late 1951 and was sent to Korea in early 1952. I was assigned to a crash crew as a crane operator at Suwon, just south of Seoul. One morning, we received a call that a Marine F-9F was approaching runway 55 on fire and without hydraulic pressure. I parked my crane on the taxiway in front of the control tower. An ambulance and three fire trucks were also standing by.

“As the aircraft slammed onto the runway, it zoomed past us. It was totally engulfed in flames as it slid to a stop. The pilot jumped off the right wing and ran away from the burning aircraft only to be stopped by the ambulance crew. It took the fire department about an hour to put out the flames as there was much jet fuel spewed on the runway. I backed my crane to the comer of the fuselage and right wing. I noticed the pilot had been brought back to the scene and was apparently OK. As I was lifting the plane to put it on a flatbed trailer, I felt a tap on my left foot. To my surprise, I looked down to see it was baseball great Ted Williams, the ‘Splendid Splinter.’ He asked me if I could raise the plane high enough so he could walk under to view the damage.

“Being raised in the Boston area in the late ‘30s and early ‘40s, I witnessed many of Ted's baseball feats in Fenway Park. I never dreamed of meeting this great man in such a far-off place as Korea.”

Williams, who played American Legion Baseball in San Diego before beginning what would become a Hall of Fame career in the pros, was a decorated combat aviator in World War II and the Korean War, famously refusing to take less dangerous duty.

Tootsie Rolls to the rescue

Tom Elliott of Escondido, Calif., wrote that in addition to C-rations, ammo and other supplies air-dropped to beleaguered Marines after the Battle of Chosin Reservoir were “box after box of Tootsie Rolls.” Seen as a source of quick energy, they needed no cooking. “However, at 30 below zero, we had to lay the candy on the ground and use our bayonets to off the pieces,” Elliott wrote. “Before chewing, it took about 20 minutes in our mouths to thaw it out.”

He wrote that they also used Tootsies to plug leaks in fuel drums, radiators and gas tanks.

Jessie L. Stewart of New Ross, Ind., wrote of her Army husband’s 1951 discovery of a South Korean boy who was barefoot, cold and hungry in Seoul. Alan Stewart scooped him up, put him in his Jeep and took him to the front lines where he was adopted by his unit. “The boy’s name was Kim Jun Hawn, but the soldiers nicknamed him ‘Shorts.’ Alan taught him enough English so he could pick up the mail and pass it out to the soldiers.”

Years went by, and after Stewart’s family asked about the mysterious Korean boy in his photo album from the war, they mounted a search and found Kim. They reunited in 1985, and ‘Shorts’ told Stewart that he owed his life and success to the soldiers who took him in.

A most delicious steak

Roy E. Portelli of West Hempstead, N.Y., wrote of the dismal conditions in July 1953 when U.S. forces were holding off the final Chinese offensive of the Korean War. His outfit, the 461st Infantry Battalion, Heavy Mortars “had been moving for a week. We didn’t change clothes for 10 days, and washing or bathing was out of the question. At one stretch, I hadn’t eaten for two days.”

Finally, the company cooks were able to set up a portable stove and cook one steak for each of the soldiers. “My turn came, but as I jumped into my hole, the steak fell to the ground. What to do? There were only just enough steaks to go around.” Hunger won out. He scraped the dirt from the steak, then wiped it off on his filthy shirt, “put the meat in the bread and enjoyed the most delicious steak I have ever eaten.”

The September 2000 special issue commemorating the Korean War 50 years after its beginning can be found in The American Legion Digital Archives.