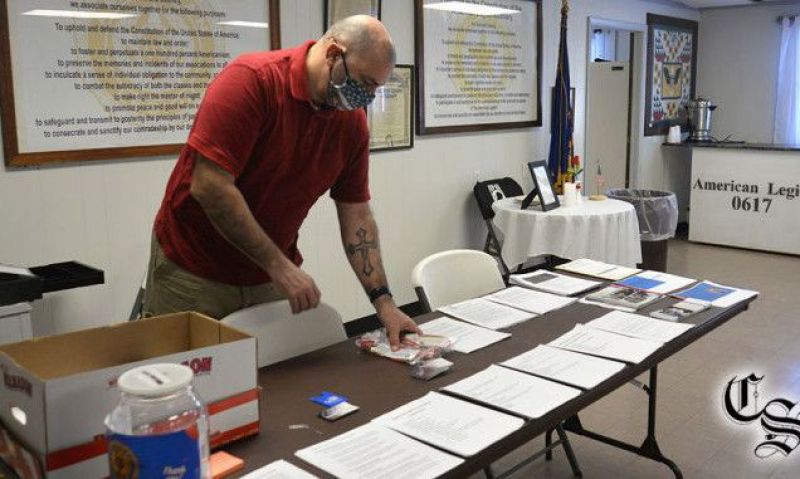 Since Kevin Arnold became commander of Osco Robinson American Legion Post 617 in Marathon, N.Y., in November of 2020, the post’s Legion Family has conducted fundraisers and undergone a “massive clean-up” of its facility, Arnold said. “I had help from members, non-members, Sons (of The American Legion) and Auxiliary in getting all this cleaned up.”

But Arnold didn’t want to just accept help. “One of the things that struck me was, OK, everybody is helping us out,” he said. “But how about helping them?”

So Arnold reached out to Cortland County Director of Veterans Services Tom Tedesco and invited him to speak at a post meeting. It was then that Arnold suggested hosting a larger meeting, inviting area veterans to learn about possible benefits and services available to them.

Fellow Post 617 member agreed, and on Jan. 8, the post opened its doors to Legionnaires from other posts, other veterans service organizations and representatives from veteran agencies for a counseling forum and workshop.

“I thought Jan. 8 would be good in that it was right after Christmas,” Arnold said. “There’s probably some stress involved with people trying to come up with money for the Christmas presents they bought. I thought this might be perfect for that. It was … just trying to figure how to get veterans more aware of the benefits they have coming to them and how to get them. And have a place where they could talk and feel comfortable doing that.”

Both Tedesco and Kyle Milk – a Peer Specialist based out of the Syracuse VA Medical Center – attended the workshop. Tedesco was able to share info on benefits and how to apply for them, while Milk discussed support for veterans suffering from post-traumatic stress disorder.

Around a dozen veterans showed up for the event, where they were able to learn about Department of Veterans Affairs and state benefits, as well as just interact with other veterans with shared experiences.

Also attending were past American Legion Department of New York Commander Mike McDermott and New York 6th District Commander Richard Price. Arnold said he was thrilled to see that kind of support from outside of Post 617.

“It was awesome to get that,” Arnold said. “Having those people there was really important. And at the end, everybody just sat around … talking and listening and finding out things that they had no idea were available or how to go about (getting them). So it was really cool. That was probably the highlight of the whole day.”

Arnold said plans already are in place for another similar workshop. “This was not a one-time deal,” he said. “Spring will be too soon, and in the summer people will be out and about doing vacations and everything. So we’re looking probably in the fall to doing this again.

“I know a couple people didn’t show up because they felt sick and didn’t want to take a chance on catching or spreading anything. But I think the second time we have a better chance of having more people attend, simply because of how effective it was for the people that showed up this time. Hopefully people will realize that this is for their benefit.”