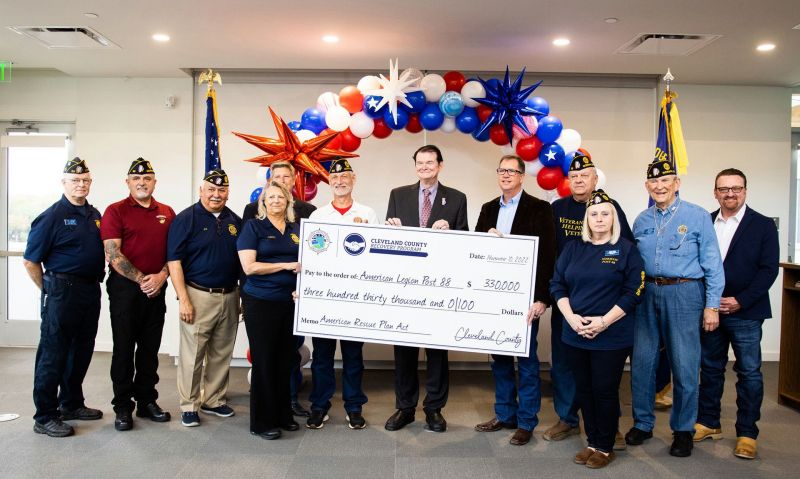 When the coronavirus pandemic brought most of the world to a standstill, members of American Legion Post 88 in Norman, Okla., realized that there were veterans who still were going to need help filing Department of Veterans Affairs benefits and compensation claims.

With social distancing protocols in place, Post 88’s team of accredited service officers adapted, working remotely and then eventually setting up safe in-person sessions. By the end of 2020, Post 88 was able to secure more than $3 million in benefits for the veterans its assisted. Those efforts continued into 2021, when the post’s work resulted in another $2 million-plus in benefits. And through November of this year, the total is sitting near $2.3 million.

The combined effort of Post 88’s team earned Post Service Officer Carl Ellison, a Department of Veterans Affairs-accredited service officer with more than 30 years of experience handling veterans benefits claims, the Department of Oklahoma Service Officer of the Year in 2021. And now, those efforts have brought another accolade to Post 88, this one with a financial benefit.

On Nov. 10, Post 88 leadership was presented with $330,000 through American Rescue Plan Act (ARPA) funding. The check was presented by the Cleveland County commissioners at a ceremony the day before Veterans Day.

"As a disabled veteran myself, I know firsthand the struggles many veterans go through to obtain benefits and services," County Commissioner Harold Haralson said during the ceremony. "These obstacles only increased during the pandemic, and I am incredibly proud that the county will be able to use these ARPA funds to help bring access to services for veterans across the county and beyond. By investing in the improvements to the American Legion, we can ensure this outstanding organization is able to continue serving the residents of Cleveland County for years to come."

Ellison said he learned from a posting on Facebook about the availability of ARPA grants. After the post got some additional information, it applied for a $330,000 grant, complete with an itemized list of how the money would be spent.

Every Monday, Post 88 hosts a walk-in benefit, while those needing assistance also can call to schedule an appointment. During the first 18 months of the pandemic, Post 88’s service officers worked with 3,200 veterans or their family members.

Ellison said the $330,000 will go toward a variety of projects and renovations needed by the post, which resides in a building built in the 1930s. It also will help fund the post’s food pantry. “The wiring in this building is real old,” he said. “We’re going to have to put a new electrical system in it. We’re going to remodel the building: kitchen, bathrooms, floor and ceilings – make it better, not just for our veterans, but for the community, to help assist in events such as natural disasters and things like that.

“We’re also going to get all new computers and get set up to do (claims) appeals, with a room set up just for that. And after we get all this stuff done, we’re going to try to (conduct clinics) more than one day a week. We’ve got too many visits going on.”

In a release on clevelandcountyok.com, multiple beneficiaries of Post 88’s efforts offered up praise to the service officers who assisted them. Veteran Eric Wilson said Post 88 “got me the mental health help that I needed, and that was all due to my service officer here at the American Legion.”

And Judy Farris, the daughter of a now-deceased Korean War veteran who cared for his wife after she developed dementia, was able to receive aid and attendance when she began caring for her mother.

“I came in here and talked to Carl Ellison,” Farris said. “He called me on a Monday morning and told me it had been approved.”

Ellison said the post receiving the grant was in part a result of what its service officers were able to accomplish during the pandemic. “I think that was a big factor because we did stay open during the pandemic,” he said. “We’re all volunteers, and we have six accredited service officers walk in the door every Monday and sit down for four, five, six, eight hours. This is important.”