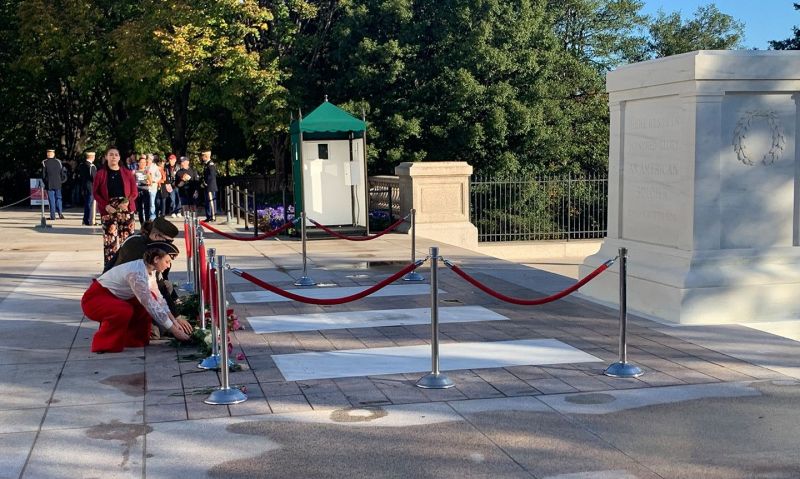 It was a cool crisp morning in Arlington, Va., Nov. 9, 2021, 100 years after the Unknown Soldier arrived in the United States. The sun poked through the oaks, maples, and elms, catching the white marble headstones in a soft vignette focus, glistening among the rolling, neatly kept green knolls. This was not my first visit to this particular hallowed ground, Arlington National Cemetery, nor would it be my last.

I made haste up Roosevelt Drive. My heels clicked in a rhythmic beat, clutching white roses in my arms. Fixated on the roses, I felt a sense of eternal peace; I clenched the stems close to my chest. Not a word was spoken. I quietly turned inward in reflection as birds chirped, and distant rumblings of trolly engines warmed up. With each step, I grew closer to my destination, and soon I reached the top of the hill.

There was something electric in the air as Tomb guards were scattered about, their awards and buttons catching the morning light, as they provided guidance and maintained order. The marble pillars of the Memorial Amphitheater have a way of making me feel reverential. Respect mixed with wonder. My thoughts were interrupted by the cemetery staff instructing visitors forward, toward the Tomb.

The short murmurs of travelers sharing how far they had come to be a part of this event grew louder as I drew closer to the Tomb. I approached the two parallel tents layered with hundreds of roses, gerber daisies, carnations and assorted flowers. The fragrances of roses around me felt as if I were smelling them for the first time. At this moment, I became a bit nervous.

For the first time in almost 100 years in part of the Tomb of the Unknown Soldier Centennial Commemoration, I was able to cross the Tomb of the Unknown Soldier Plaza and walk the line paced and worn in stone where the 24-hours-a-day soldiers from the 3rd U.S. Infantry Regiment, known as “The Old Guard,” stand watch over the Tomb. The thought of me walking that same line left me awestruck, nervous and patriotic.

Few know that the Old Guard is a combat unit. In 1994, the decorated 289th Military Police Company became attached to the Old Guard. This MP branch is a combat-support unit that includes women. As a former MP, I knew that the reactivation and attachment of the 289th MP Company provided the first opportunity for women to serve as sentinels.

Only five women have been chosen to guard the Tomb. Sgt. Heather Johnson (1996), Sgt. Danyell Wilson (1997), the first Black woman to earn the badge, Staff Sgt. Tonya Bell (1998) first woman to serve as relief commander, Sgt. Ruth Hanks (2015), and Sgt. 1st Class Chelsea Porterfield (2021), the first women sergeant of the guard, and the women who would lead the first all-women shift change in 84 years, on the 30,770th day of continuous protection.

It is funny what floats through your mind to distract you at times like this. A few weeks ago, I looked onward to the steps and memorial display room, where I was finishing the final details of my artwork depicting the sacred duty to guard the Tomb. I was inspired by a recent event at the Military Women’s Memorial collaborating with The Society of the Honor Guard, Tomb of the Unknown Soldier. I remember going through multiple drafts, sketching the Tomb, inspired to capture the united diversity of past wars. I wanted to capture the best that each generation has offered in exemplifying selflessness, courage and character.

The next thing I knew, I was standing in front of the line, about to lay down my flower in honor of a soldier whose name will never be known, but who represents all who have served and sacrificed for our nation.

For 100 years, the Tomb of the Unknown Soldier has served as the heart of Arlington National Cemetery. As a sacred memorial site and the grave of three unknown American service members, the Tomb connects visitors with the legacy of the U.S. Armed Forces throughout our nation’s history. I was about to be a part of that history. I adjusted my American Legion cap, and in a moment, I stood in front of two men in dress blues. “Ma’am, you may approach the Tomb,” the sergeant instructed. I stepped forward, one foot in front of another, emulating my best 30-inch step. I glided along.

Velvet ropes formed the perimeter around the three tombs. I stood in front of the center of three crypts, staring at the sarcophagus inscription: “Here rests in honored glory an American soldier known but to God.”

I paused in reflection and stared at the carved words. I thought about how you arrived this day, 100 years ago on the USS Olympia at the Navy Yard in Washington D.C., the spray of white roses still resting upon the flag-draped casket, as the National Anthem played, welcoming home its long-awaited son. Here, you rest along with those of subsequent wars.

I clutched my white roses one last time. I knelt to rest them on the cold ground. I spread them out and stood back up, let out a deep breath, lowered my head to my hands and counted 21 seconds. I turned to my right and stepped away. As I did, I glanced back, reflecting  on service, valor and sacrifice – a moment in my personal history that has everlasting meaning for all of us who have served and sacrificed, regardless of our military occupational specialty, branch of service, gender or name, known or not.