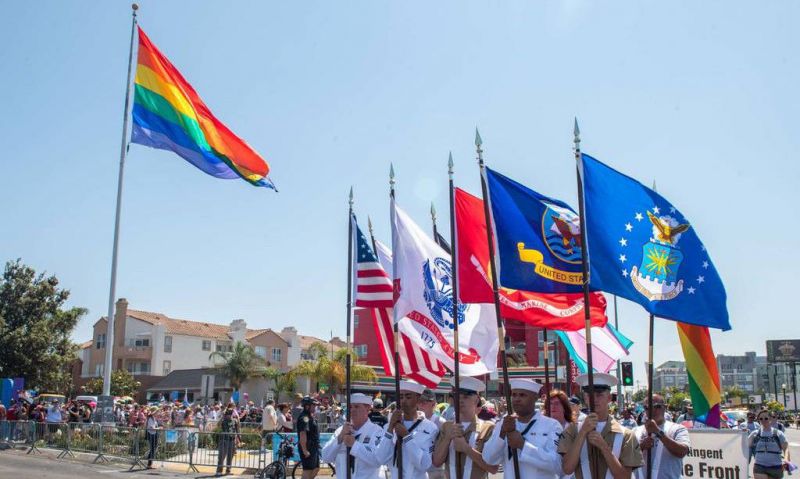 Color guard members from the Navy and Marine Corps march in the San Diego Pride Parade in 2018.

The LGBTQ community and its allies, including veterans and servicemembers, celebrate Pride Month each June, commemorating the anniversary of a watershed moment in the fight for equality.

In a message honoring Pride Month, President Biden reflected on the progress the U.S. has made in the fight for justice, inclusion and equality. The president also affirmed the nation’s commitment to do more to support LGBTQ rights at home and abroad.

“This month, we remind the LGBTQI+ community that they are loved and cherished,” Biden said. “My administration sees you for who you are — deserving of dignity, respect and support.”

Acceptance has improved in the decades since the Stonewall Uprising, which propelled the LGBTQ rights movement in the United States. In the early hours of June 28, 1969, New York City police raided the Stonewall Inn, a popular gay bar in Greenwich Village, sparking six days of protests in New York City.

LGBTQ servicemembers and veterans have a supporter in Rep. Mark Takano, D-Calif., chairman of the House Committee on Veterans’ Affairs. In 2021, he introduced legislation to establish a commission that must identify and compile information about the history of military policy regarding homosexuality from 1778 onward, including LGBTQ sexual orientation and gender identity.

“LGBTQ+ Americans have stepped up to serve our country for generations,” Takano said. “They too deserve access to inclusive care within the VA. There is no room for outdated policies and underrepresentation in VA health policies — especially when it comes to accounting for the years of discrimination these servicemembers have faced. I applaud The American Legion for consistently advocating for veteran LGBTQ+ health-care improvements and will continue to advocate for equity for all veterans in Congress."

For decades, servicemembers battled discrimination in the ranks despite LGBTQ rights progressing in the country. The Department of Defense implemented the “Don’t Ask, Don’t Tell” (DADT) policy during the Clinton administration. Under this policy, the ban on LGBTQ servicemembers was lifted. While no longer forced to lie about their sexual orientation, those who wanted to serve in the military were also not allowed to disclose it.

Despite “Don’t Ask, Don’t Tell,” hundreds of thousands of LGBTQ people served in the U.S. military under the discriminatory policy. They served in silence, forced to hide their identities or risk being discharged. Ultimately, more than 13,000 lesbian, gay and bisexual servicemembers were discharged under DADT before it was overturned by the Obama administration in 2010.

These servicemembers were given other-than-honorable discharges, which made them ineligible for VA health care, disability compensation, home loans and burial benefits. At the same time, these veterans faced a higher risk of unemployment, incarceration, homelessness and suicidal ideations. Transgender veterans die by suicide at twice the rate of their cisgender veteran peers, and nearly six times the rate of the general U.S. population.

“Our veterans have made incredible sacrifices for this great country and deserve the best possible care our nation has to offer,” Mace said. “All our brave servicemembers deserve the same access to care under the VA, regardless of their sexual orientation.”

The American Legion National Executive Committee passed Resolution No. 10: Care for the Lesbian, Gay, Bisexual, Transgender, Queer, + (LGBTQ+) Veteran Community. This resolution aims to address some of the barriers LGBTQ+ servicemembers continue to face. Through this resolution, The American Legion urges Congress to pass legislation to improve the environment of VA health care for the LGBTQ+ community.