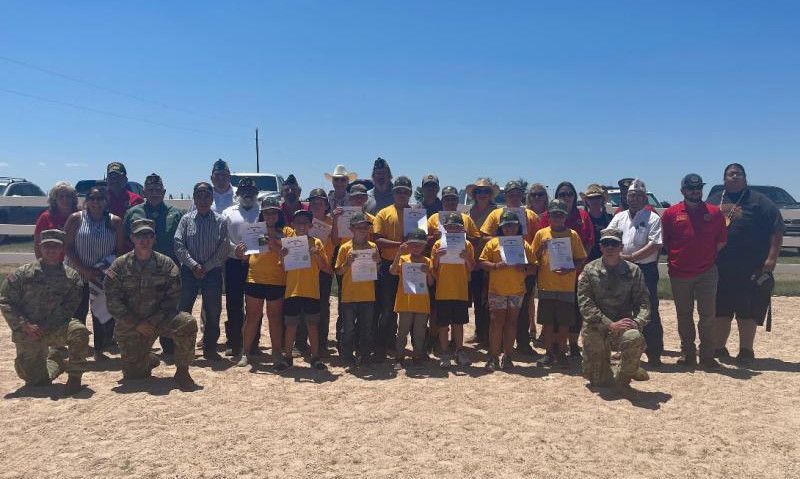 As a middle school teacher and an American Legion member, Albert Lovato’s goal is to connect the Legion with young people for a greater impact in the long term, especially with future involvement in Americanism programs and membership. He has been thinking of ways to uphold the Legion’s Americanism and Children and Youth pillars by engaging his Post 22 Legion Family members in Estancia, N.M., with youth in the community. And last month an idea of his resulted in great success – a three-day camp at Post 22 with 12 kids, ages 8 to 12.

“My goal is to impact young people, especially now more than ever,” said Lovato, Department of New Mexico District 3 adjutant and Sons of The American Legion Squadron 22 commander. “If we get them involved, build those relationships and rapport with The American Legion, it will definitely increase our kids going to Boys State and Girls State. And it builds that camaraderie and relationships with the community, and what we stand for.

“I also think if we impact these kids early on in life, let them know who we are because a lot of people don’t know who we are or what we do, in a sense we create American Legion members. Because let’s say they do join the military, or have a family member who served, they will be more excited to become of member of The American Legion or a member of the Sons or Auxiliary.”

Post 22 advertised the camp on flyers posted throughout the community; applicants had to write an essay about why they wanted to be a part of it. Lovato said 12 kids applied, including his son, and the post felt that was a perfect number to kick of its inaugural youth camp.

The 10 boys, two girls and their parents arrived to Post 22 on July 14 for an introduction into what the next three days and two nights looked like for activities and safety guidelines. The kids set up tents outside the post to camp, wore their Legion hat and T-shirt, and prepared for their days of learning technical, social and life skills.

Thanks to the efforts of Post 22 Legion Family members, the kids learned about the history of The American Legion, the Legion Family entity, Americanism programs, how to raise and lower the U.S. flag, and what the POW chair represents. Members of the fire, police and DWI departments provided education and safety tips; and a nurse provided basic first aid care. They also participated in daily physical fitness, arts and crafts, a nighttime point-to-point challenge using a map and compass, and tried MREs like servicemembers eat. And every kid was a squad leader for a period to “learn that role of leadership,” Lovato said.

The final day of camp was an obstacle course at the post set up by the New Mexico National Guard. “They were so excited when the National Guard came and set up the obstacle course. I think that was a really good conclusion to the whole camp,” said Lovato, who served in the New Mexico National Guard. Then a formal graduation followed, where the kids received a challenge coin and a certificate in front of their parents, Legion Family members and community members who helped make the camp possible.

“It was very, very impactful, and the positive feedback from the community has been amazing,” Lovato said. “The camp not only gave skills to our youth, it made our post closer and stronger. It just shows what a small post can do. This experience has been great for all our veterans.”

Lovato said the camp gave older members of the post a sense of purpose again. “They had a purpose, like their time in the military, to serve and do something for kids and they loved it. It was nice to see our Vietnam veterans come in and feel that purpose again.” And thanks to generous donations from community businesses, the camp was able to be held.

“We are small post, and we don’t have a lot of money. The community loved the idea and we got tons of donations from businesses, and we were able to make the camp happen. It was a huge community effort. We show how a tiny post can make an impact in our community and our youth.”

Lovato said parents are already inquiring about the camp next year, which he says will happen after the profound impact this one had on youth and American Legion Post 22.

“This has been one of the most memorable moments in my time in the Legion, and I know others feel the same. The kids were so excited and happy, including the families,” he said. “These kids now know us. If they see us at a store or a gas station, they have friends within The American Legion that they can always come to. This is something that we want to carry on every year … something they can look forward to every year and can carry over as they look into Boys and Girls state.”