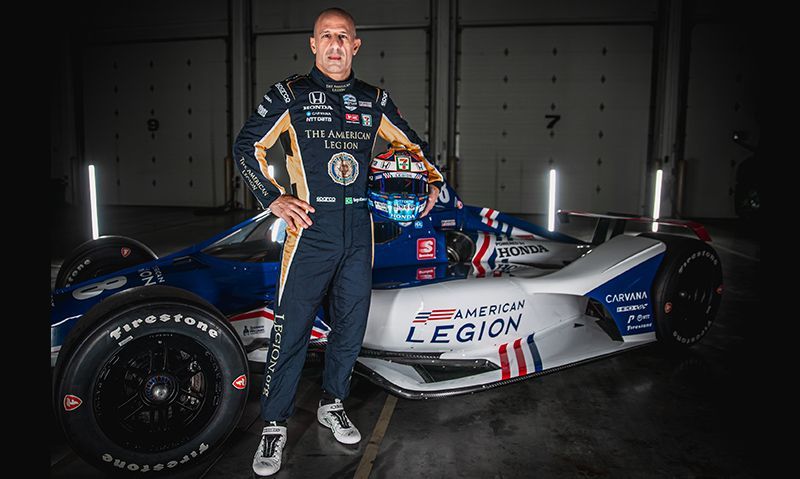 The Chip Ganassi Racing No. 48 Honda will have a different look – and different driver – when it takes to the Texas Motor Speedway for the May 2 XPEL 375.

Tony Kanaan, the 2004 INDYCAR Series champ, will make his 2021 NTT INDYCAR Series debut behind the wheel of a racecar upon which The American Legion is the primary paint scheme. Kanaan will drive the car this weekend and then during Memorial Day weekend’s “Greatest Spectacle in Racing,” the Indianapolis 500 – a race Kanaan won in 2013.

The American Legion and Chip Ganassi Racing have entered into a multi-year sponsorship agreement for the No. 48 Honda in the NTT INDYCAR Series. Seven-time NASCAR Cup Series Champion Jimmie Johnson is driving a No. 48 car featuring American Legion branding prominently in its paint scheme during this season’s road races, while Kanaan will compete in oval races.

In just his second INDYCAR race, Johnson drove the No. 48 car to a 22nd-place finish in the Firestone Grand Prix of St. Petersburg. Ganassi teammates Scott Dixon (fifth) and Marcus Ericsson (seventh) both recorded top-10 finishes, while Alex Palou was 17th.

For more information on The American Legion and its NTT INDYCAR SERIES participation, visit www.legion.org/48. We’ve also made available a printable, downloadable poster/flyer featuring the American Legion-sponsored 48 car and its scheduled appearances in the NTT INDYCAR SERIES for 2021 so fans can keep up with the action and promote the competition in their communities. Click here for more info and here to download the poster.