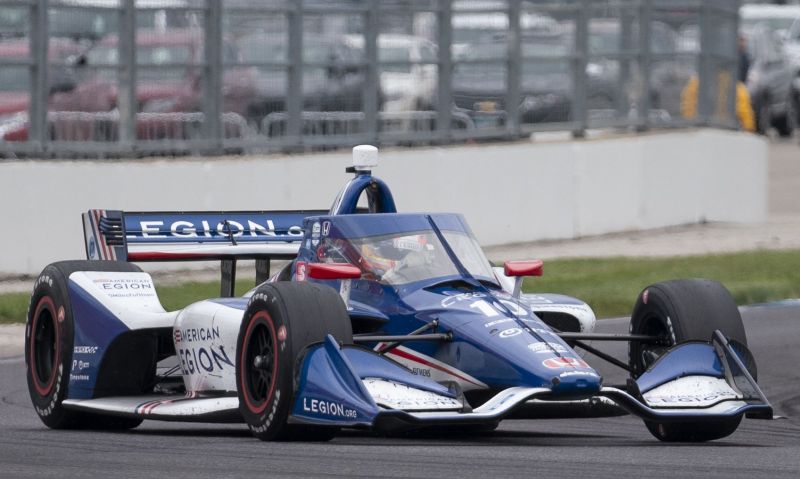 Alex Palou will use The American Legion livery for the second time this season when he competes in the Detroit Grand Prix this weekend. (Photo by Ben Mikesell)

The American Legion will get twice the exposure this weekend in Belle Isle, Mich., with two INDYCARs showcasing American Legion branding during the Detroit Grand Prix doubleheader.

While seven-time NASCAR Series champ Jimmie Johnson will drive the No. 48 Honda for Chip Ganassi Racing (CGR) this weekend that includes American Legion branding, fellow Ganassi driver Alex Palou will drive his No. 10 car featuring The American Legion as the primary paint scheme for the second time this season.

Palou, in his first season driving for CGR, is off to a hot start in the NTT INDYCAR Series. The 24-year-old is coming off a narrow second-place finish to four-time champ Helio Castroneves in the May 30 Indianapolis 500. That finish moved Palou into first place in the series points race, 36 points ahead of CGR teammate Scott Dixon.

Palou won the season-opening Honda Indy Grand Prix of Alabama at Barber Motorsports Park in Birmingham; recorded fourth- and seventh-place finishes in the Genesys 300 and XPEL 375; and then drove the No. 10 car with The American Legion livery to a third-place finish in the GMR Grand Prix in Indianapolis.

This weekend’s Detroit Grand Prix doubleheaders take place June 12 and 13 at Belle’s Isle, a 2.35-mile, 13-turn temporary street circuit. Qualifications for Race 1 are from 11 a.m.-noon June 12 and will be broadcast on Peacock and NBC Sports. Race 1 starts at 2 p.m. ET and will be shown on NBC.

On June 13, qualifying for Race 2 start at 9 a.m. on Peacock and NBC Sports, while race coverage begins at noon ET on NBC. Click here for complete details on both races.