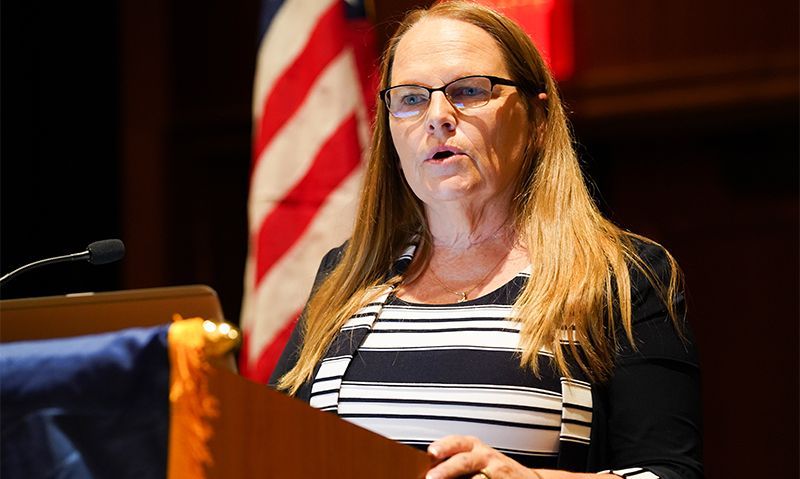 Margaret Evangelesta, director of the Veteran Business Outreach Center (VBOC) in Arizona speaks during the the Veteran Employment and Education Commission panel discussion at The American Legion’s 102nd  National Convention in Phoenix on Aug. 28, 2021. Photo by Jeric Wilhelmsen/The American Legion

That was among the key takeaways from Margaret Evangelesta, director of the Veteran Business Outreach Center (VBOC) in Arizona, who was among the panelists during a Veterans Education and Employment Commission meeting on Saturday during The American Legion’s 102nd national convention in Phoenix.

“I don’t know about you, but when I transitioned, it was a little tough,” said Evangelesta, who retired as a sergeant major from the Army after 26 years. “A lot of transitioning servicemembers feel that challenge and they are not really ready to go work for somebody else in the civilian world. But they are ready to be a business owner, and take those skills and traits they learned in the military — or as a spouse — and put them to work in their small business. And that is why they are so successful overall.”

There are 22 VBOCs nationwide, funded by grants from the Small Business Administration (SBA), explained Evangelista. The program is designed to provide entrepreneurial development services such as business training, counseling, mentorship and resource partner referrals to transitioning servicemembers, veterans and spouses interested in starting or growing a small business.

When asked a question about whether VBOC is ready to assist businesses as the Delta variant of COVID threatens to force restrictions on small businesses, Evangelesta answered with an empathetic “Yes, but I’ll say we’re prepared.”

She went on to cite a series of examples of how VBOC helped businesses pivot earlier in the pandemic. Restaurants started home delivery of meals. A clothing company transitioned to making PPE equipment. A karate studio, fearing it would go out of business, adjusted its pricing structure. Before COVID, it had 200 students paying $120 per month for in-person lessons. The studio dropped the price to $60 per student for Zoom classes and increased its business.

“What we have to remember, and the military teaches us this, is we have to shift,” she said. “We may be looking at another year, or 18 months of this. And we have to be able to do what we need to do and still survive.”

Among other speakers during the meeting was Larry Stubblefield, a retired Army colonel and member of The American Legion. He is the associate administrator in the Office of Veterans Business Development at the SBA.

Stubblefield began his presentation by quoting, Isabella Guzman, the SBA administrator, who took over in March.

“Small businesses are the giants of our economy.”

“We’re looking to help small businesses recover and rebuild through the pandemic,” he said, emphasizing those owned by minorities and/or located in rural areas. “Small businesses have had to pivot and we at SBA have had to do the same thing.” Army veteran Charles Fowler, the chairman of The American Legion Small Business Task Force, also presented to the commission. He is president of Global Procurement Systems, one of the small businesses he has founded in five different industries.

Fowler discussed some issues related to the Vets First program.

However, Fowler cited a Department of Defense inspector general’s report from last year saying that $800 million was awarded incorrectly to non-eligible companies.

He is pushing to pass legislation strengthening the ability for veterans get priority to seek and win these set asides. The idea is to pass the certification from VA to DoD to ensure the proper companies are getting the procurement contracts.

“That’s what we’re trying to get rid of,” he said, referring to non-eligibles, “and open it up the veterans who are doing the work and are the ones who are competing. And they are not competing against others who are not veterans and just got a pass-through.”