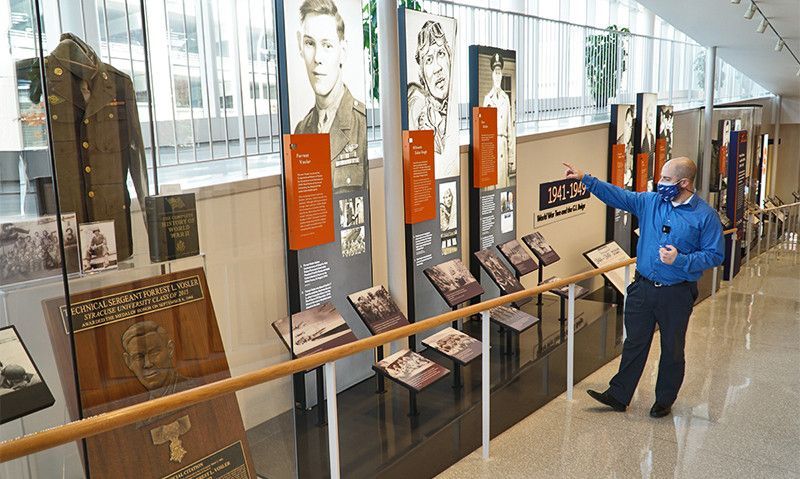 Mike Haynie joined the faculty at Syracuse University in 2006 with no intention of involving himself in veterans advocacy or military-related research. “I just wanted to be a college professor,” said the former U.S. Air Force Academy management instructor and PhD, now vice chancellor of strategic initiatives and innovation at the university where a $62.5 million National Veterans Resource Center has risen to global prominence from one small program he started 15 years ago.

The center – which houses multiple Syracuse University-based programs that have helped more than 150,000 veterans, troops and families worldwide and advanced policy-influencing research on the post-9/11 veteran experience – was officially dedicated in a Wednesday ceremony that had been COVID-delayed since April 2020.

Early in his tenure at Syracuse, Haynie saw a need among severely disabled student veterans who had come home from war facing uncertain futures. What would they do now? How would they do it? Who could help them? Could they succeed in business if that was their dream?

So, the professor developed a small entrepreneurship program to help and welcome “traumatically wounded servicemembers to the university who may face barriers to traditional employment because of disability issues. I figured, here I am a vet, and I’m an entrepreneurship professor. Why not create a program to help veterans with disabilities become small business owners? It was just going to be something for me that was personally meaningful … When we built it, then we launched it and saw how it impacted the lives of veterans … we decided, ‘We can do more of this.’”

Much more indeed would be done.

Next was a program to help women veterans pursue business careers. Other programs followed as the Post 9/11 GI Bill changed the higher education landscape for veterans after 2009, and in 2011, Haynie founded the Institute for Veterans and Military Families (IVMF), headquartered at the university but with operations across the country and at eight U.S. military bases in foreign countries. Over its first decade, the institute grew from just a handful of employees to more than 100 full-time professionals who conduct research and present findings that influence Congress, VA, DoD and business on today’s veterans. The institute received The American Legion’s prestigious Patriot Award in 2020.

About seven years ago, an even bigger picture came into focus. The National Veterans Resource Center in the Daniel and Gayle D’Aniello Building (so-named thanks to a pivotal $20 million gift from the Navy veteran and Carlyle Group co-founder) would tether together all the campus programs, services, research initiatives and more – from career assistance for individuals to a third-level parade ground for drilling ROTC cadets – into one brand-new 115,000-square foot facility.

“You have to really struggle to find a set of stairs in this building,” Army veteran and IVMF communications manager Brandon Dyer explained on a media tour of the sunlight-flooded structure of vaulted ceilings and elegant woodwork in the heart of campus.

“This building was designed very purposefully as it relates to the community we serve,” Haynie explained. “This is, I would suggest, the most accessible building that Syracuse University has ever built. It might be one of the most accessible buildings in the state. The entire building is navigable by a ramp system and elevators. You have Braille embedded in the handrails. All of the displays, etc., are accessible to people with sight impairment. Even the auditorium is entirely accessible by wheelchair. We can put 90 wheelchairs in the auditorium. So, it’s remarkable from an accessibility perspective.”

Army veteran and Syracuse student Miguel Pica says he feels blessed to have the center on campus to help him and others who have served. “The NVRC has multiple resources assisting in transition,” said Pica, who helps other student veterans who use the facility. “I think that’s one big area where veterans struggle.”

Among the features of the center is the Floyd Ben Schwartzwalder Hall of Honor, a corridor leading to the building’s canteen and art-therapy studio/gallery that takes visitors on a journey through Syracuse’s rich history of military connection, from World War I officer training through the story of alum Col. Eileen Collins, first woman to pilot and command a Space Shuttle. Along the corridor of placards and uniforms appears the story most closely associated with The American Legion – Syracuse’s place in the development and success of the original GI Bill.

Syracuse was one of few private higher-education institutions that embraced the Servicemen’s Readjustment Act of 1944, which The American Legion drafted and pushed to passage.

Haynie said that while some Ivy League schools were publicly doubting that World War II veterans would ever make it at schools like Harvard, Syracuse Chancellor William P. Tolley recruited veterans and helped develop the GI Bill’s education component. Displayed in the hall of honor is a letter Tolley wrote to “all returned war veterans. Subject: your future.”

“In our Veterans Educational Program… we have aimed to meet all the requirements to the best of our ability and to provide the type of training needed, whether it be a four-year degree program or a vocational course on the college level that can be completed in eight months. If yours is a special case, we shall welcome an opportunity to discuss it with you and to arrange a program suited to your individual needs. If you need help in making your decisions for the future, our staff of experts in guidance is available to you.”

Enrollment soared. Syracuse had previously been a regional college of no more than about 4,000 students. “After his letter, within two years of the end of the war, just over 18,000 students,” Haynie noted. “We borrowed Quonset huts from the Department of War and set them up all over campus. We leased barns and farms all around central New York to turn them into dormitories.”

Tolley’s alternate approach to welcoming World War II veterans at Syracuse was not a public-relations stunt, Haynie said. “(He) intuitively understood that these folks coming back are going to go off and become business leaders, congressmen, senators and leaders in their community.” By attaching the veterans to Syracuse University, Tolley believed they would transform the institution. “And that’s exactly what happened.”

“The GI Bill was probably one of the biggest developments in higher education in the past 75 years and certainly the biggest development at Syracuse University,” Dyer told reporters as he toured them through the hall of honor, named for decorated World War II Normandy battle commander Ben Schwartzwalder, who later coached Syracuse to its only national college football title. “The college that we have today is because of the thousands of servicemembers returning from World War II that were living in temporary housing.”

The American Legion’s “Greatest Legislation” multi-media display was installed Nov. 1 at the National Veterans Resource Center as part of the dedication celebration. It will be in the front lobby of the building through Nov. 15.

“The GI Bill is by far the greatest piece of legislation, in my opinion,” Dyer said. “It allowed me to work full time while supporting my family, and going to school, in a way other benefits just do not do … not having to worry about a secondary job while going to school. These are all major things that when you’re leaving service, you don’t necessarily think about, but when you’re actually in it and doing it – the courses and the classes – having that safety net, it’s incredible. It allows you to really focus on your studies.”

Images of Syracuse military history be found on nearly every floor of the center, including Tuskegee Airmen Wilmeth Sidat-Singh and Hilliard Pouncey, who overcame segregation and prejudice to fight in the skies over World War II, and World War I Sgt. William Shemin who posthumously received the Medal of Honor in 2015 for his actions at the Vesle River in France 97 years earlier, after the Jewish veteran’s heroism had been overlooked for decades; he earned a degree in the Syracuse College of Forestry after the war. Architect and World War I veteran Lorimer Rich, a 1914 alum, designed the Tomb of the Unknown Soldier. Another Syracuse grad, World War II pilot Newt Heisley, designed the POW-MIA flag that flies across the nation and has a place of honor in front of the new center. One panel in the hall remembers that Syracuse was home to the Army’s comptroller training program in the 1950s.

Military and veteran history is not just for students who served in uniform, Haynie said. It’s for the majority of students and faculty who don’t know or understand the military experience.

“Less than 1% of all Americans have shouldered the burden of the past 20 years of war. One of the consequences of that is many of our students, faculty, staff and members of the community don’t know anybody who has served in the military, and we wanted to create a facility that would actually bring people in. So, for example, that beautiful auditorium is not an auditorium just for our military-connected programs. It’s an asset for all of Syracuse University. We have classrooms in this building that are not dedicated to our military programs but purposely, we put in this building registered classrooms to bring students in broadly that are otherwise not connected to veterans or the military … to create the opportunity for those students to know a little bit about what the military service experience is, more importantly to know and understand those who have served. I think that’s a very purposeful strategy.”

The military experience continues to evolve at Syracuse, Pica says, especially now for those who served in Afghanistan. “From what I have noticed, it has been a struggle, depending on how long they were deployed. It’s all situation-based, on the veteran. It’s tough. It’s a tough pill to swallow, but I know reminding each other that we have made a difference … for the Afghan people, and nothing was wasted.”

Mental health and well-being are among the center’s many national research areas as well as campus support services for veterans. The studio/gallery in the center’s lower level offers veterans a place to express themselves through art and to display it for others to interpret.

“We have found, in our research, that through art therapy, many veterans are able to work out emotions or basically put some of their emotions to paper in a way that maybe they weren’t able to do, just talking about it,” Dyer said. “In this space, you are encouraged to do your own kind of art … and respond to these pieces.”

“Mental health is a big thing – and right now, reminding each other that you’ve done everything to the best of your ability and continuing to grow, that’s the most important part,” Pica said. “To grow … and grow from this experience.”

If anything Syracuse’s history has shown Haynie and those who work at the center, it’s that the military experience is always fluid, from the need to train World War I officers to art therapy for post-9/11 veterans and whatever may come in the future. The center, Haynie said, is poised to evolve with the transition-support needs of student veterans, however they may manifest themselves.

“There is nothing like this facility in all of higher ed. This is planting a flag, that Syracuse University is committed to do what it does best, to teach and train and inspire, to positively impact the community of folks who volunteer for military service and now are trying to navigate what’s next.”