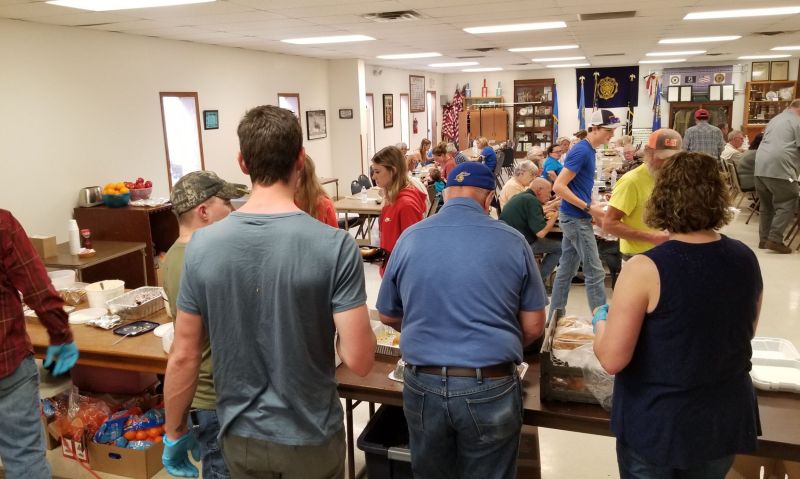 On May 12, a powerful storm moved through Eastern South Dakota, bringing with it tornados and what is known as a derecho, or a widespread, long-lived windstorm associated with a band of rapidly moving showers or thunderstorms.

One of the areas hit was the small city of Castlewood, where an EF-2 tornado with winds around 120 mph knocked out power, destroyed or rendered uninhabitable 20 structures and heavily damaged dozens more. But in the town resides Olson-Reid Post 250, which took the lead in relief efforts and ended up bringing the town together in support.

Post 250 Commander Harry Boner lives a few miles outside of town with his wife Mary – the Children & Youth programs manager for the Department of South Dakota’s and the state’s Auxiliary Americanism chairman. Harry said he saw a couple funnel clouds touch down in a nearby field, but it wasn’t until he saw the derecho moving in that he realized the town could be in trouble.

“It made you think of the Dirty Thirties and the Dust Bowl,” said Harry, the department’s Americanism chairman. “Being post commander and where our post is located (in the Castlewood Community Center), I thought I better come down and see what I can do to help, in case they needed assistance with a door-to-door search and rescue, or just being at the post as a representative.”

The storm hit the town in the early evening, so Harry decided it was important to start making some food available to those impacted. The grocery store next door opened up so Harry and other volunteers could get what they needed to make sandwiches.

“Things got rolling as the town started figuring out what to do with folks and how to proceed with things,” Harry said. “In that process I was nominated to serve as the point of contact for making sure the town was fed. And I thought, ‘I can do that.’

“I wanted to make sure we always had a representative of the (Legion Family) there … just to help answer questions. I had a lot of people on the logistical side coordinating food … shuffling things around so we didn’t have the same three meals in a row, if possible.”

Harry began working with county emergency management officials to monitor food that would become available and was where it needed to be. Volunteers began assisting the effort.

The post’s Legion Family led efforts that provided three meals a day to residents – something critical for those residents without power three to four days while the community center was able to run on a generator.

In addition to feeding local residents, the post also spearheaded efforts to feed National Guardsmen deployed to the area and electrical lineman brought in to help restore power.

From the day after the storm until the following Friday, the post and volunteers served more than 7,400 meals. Around 224 volunteers that included Post 250 Legion Family members dedicated more than 1,300 hours to the cause.

“As we were working through, trying to come up with food and work up meals, the donations started coming in,” Harry said. “And it wasn’t just local vendors. We had individuals who wanted to help out. Some church organizations provided meals for us. Our lunch meals were provided by Lake Area Technical (College). Folks were coming around helping us with donations of food. Some organizations brought staff members to help us serve.”

Harry also served as a point of contact for any veterans in the community who apply for National Emergency Fund or Temporary Financial Assistance grants through The American Legion. “We were set up for that and ready for any applications that we could process,” he said.

Something else that came about as a result of Post 250’s effort was the forgiveness of a debt. As a community enhancement project, the post had arranged to place landscaping around Castlewood’s sign and flag poles. The company hired to do the job, Mack’s Landscaping, installed pavers and rock around the sign. When Mack Landscaping saw what Post 250 did after the tornado and storm hit, its owners donated the $1,800 landscaping project to the post.

“Folks in the town really found out, it seemed, what the Legion is all about,” Harry said. “It’s not just flipping pancakes and paying for baseball. We’re there to help serve our community and help our veterans. We were in the community helping out as much as we could.”

But Harry also had strong words of appreciation for all those who stepped forward to assist following the disaster. “Folks in the community bonded together to see what they could do to help,” he said. “They see what we’re doing, and they see what they can do to help to help us fulfill our mission. I really want to thank the community for coming together and helping out each other and assisting the Legion and the Legion Family with our goal to serve others.”