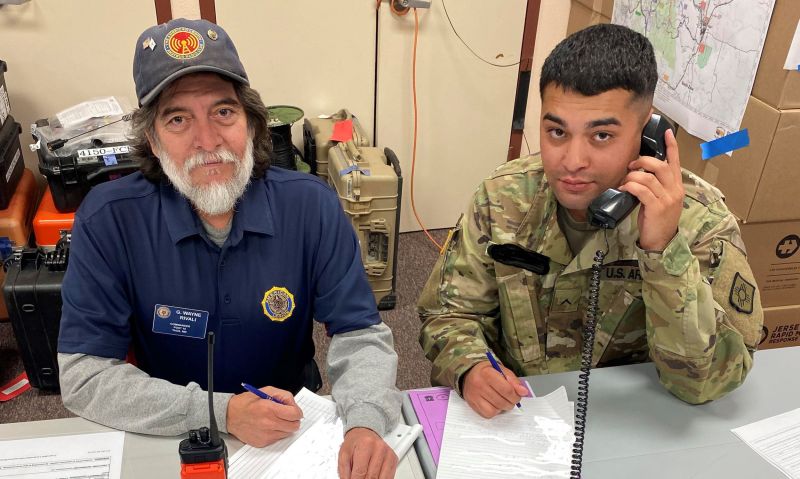 In late May, as wildfires ranged across New Mexico, the commander of Sisneros Martinez American Legion Post 16 in Taos reported on how his post’s TALARC club was aiding firefighters.

“The Taos Amateur Radio Club (TARC), a ham radio club, activated Amateur Radio Emergency Service (ARES) with the support of Sisneros Martinez American Legion Post 16 in Taos, N.M., to support the Federal Type 1 Fire Team that took over Taos City Hall as an incident command center. TARC and Post 16 volunteers supported critical radio communications to coordinate operations at the front lines of the 300,000+ acre Calf Canyon/Hermit's Peak Fire, both air and ground. Post 16 members of The American Legion Amateur Radio Club (TALARC), the only American Legion post in New Mexico with acknowledged membership status in TALARC, has been assisting the Central Communications Command with orders for various types of firefighting equipment, emergency medical assistance and coordination with on-site mobile ambulance and medic treatment, food supplies for firefighters, etc. We also assisted with programming (cloning) new incoming crews with those who own their own radios to the Comms Central frequency and issuing radios to those who don't have their own radios. All who volunteered to assist were trained by Brent, Roxy and Cinders with Federal Fire. Words cannot describe my experience with working with three of the most wonderful and dedicated people I have ever met, or talking to crewmembers on the front lines who I will probably never meet. When the fires are finally out, Brent, Roxy and Cinders will be off to the next one, but I will never forget them. They are at the top of the pyramid in importance for fighting wildfires. Radios aren't just for fun. Honed radio skills can be used for emergency relief efforts just like the one we are battling in northern New Mexico. While much damage to forest and private property has been done to the areas of northern New Mexico, it amazes me that the damage isn't more substantial, given that the crews are fighting the fire in daily 30-mile-an-hour winds on average. Gusts beyond that create fire blowups that they have to deal with. Central Communications, in my opinion, is to thank for coordinating blowups for safety and strategy. I encourage all American Legion posts to examine the advantages of radio and implement TALARC into your post.”

Members may now enter their membership number and the year they joined, on a full-color, downloadable and print-ready TALARC Membership Certificate.
LEARN MORE