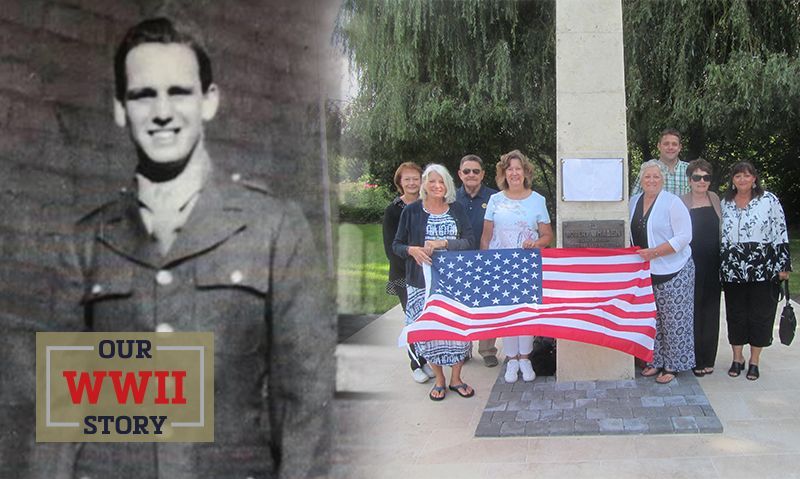 World War II U.S. Army Pvt. Robert J. Whalen was the only American soldier killed in action Aug. 29, 1944, during the liberation of Vailly-sur-Aisne in northern France. He was crossing a bridge by Jeep when a German tank fired and struck him. He was 20 years old.

Several town people witnessed what happened and hid his body in the town hall, then moved it to a church, for safety.

Whalen is buried in Epinal American Cemetery, which is located about 230 miles southeast of France. Family members have visited Whalen’s gravesite to pay their respects, including Tamea Hewitt, niece of Whalen and wife of Legionnaire Jerry Hewitt.

But what the family didn’t know, until recently, was that in 1953 the town of Vailly-sur-Aisne erected a monument in honor of Whalen for his service and sacrifice in liberating the town, and have commemorated the anniversary of his death every year since 1944.

Catherine Whalen Purdy, Whalen’s niece, always felt like there was more to the story of how her uncle died in the war. After extensive research, in late 2020 she found his name in the book “Chemins d’absence” by Vailly-sur-Aisne author Pierre Commeine. Then she saw pictures from the town of Vailly-sur-Aisne commemorating Whalen’s service and sacrifice next to his monument on the 75th anniversary of his passing.

“I thought, ‘This cannot be the same Robert Whalen. Why would my family not know about this (the monument)?’” she said to The Connexion.

Jerry, a member of American Legion Post 173 in Versailles, Ind., echoed the same shock. “Everybody was overwhelmed,” he shared with The American Legion. “How did we not know this? How did it go on that long with nobody knowing?”

The answer was found in a mansion near Paris.

A young man named Alliance was renovating the mansion and found a letter sent to Whalen’s parents in Norwood, Ohio, in 1953 with an invitation to see the monument in Vailly-sur-Aisne that honored their son, along with photographs of his Jeep with American colonels present. His parents had moved, so the letter was returned to sender.

Last month on Aug. 29, the 77th anniversary of Pvt. Whalen’s death, for the first time several of his family members traveled to Vailly-sur-Aisne to participate in the ceremony that remembers him, pays tribute to the monument erected in his honor, and celebrates the liberation of the town.

Tamea, Jerry, their son and five other family members attended the ceremony along with Alliance, who brought the letter and pictures he found in the mansion. The ceremony included historic films, an exhibition and a reconstructed American camp.

“It’s just an unbelievable story. Especially for them (Whalen’s family and town of Vailly-sur-Aisne) … they are living it.”