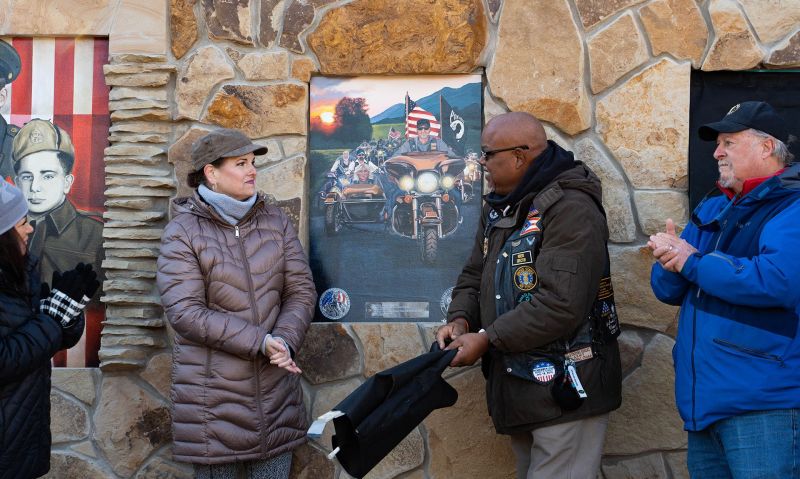 More than 10 years ago, local artist and Sons of The American Legion member Mike Sekletar began turning the outside wall of a two-story brick building in downtown Amherst, Ohio, into a portrait of history to honor America’s veterans. Service and sacrifice are visible when locals and visitors walk by or park at 248 Park Avenue. The first mural Mike painted is that of the World War II Iwo Jima flag raising, followed by a rendition of the Vietnam War painting “Reflections” with the names of 98 fallen men from Lorain County, then a tribute to the Korean War with the Korean peninsula surrounded by combat soldiers, fighter jets, a battleship and a nurse. The final mural was dedicated in 2017 on Veterans Day – the faces and names of 12 local fallen servicemembers from the Global War on Terror.

When the brick wall was complete, John Sekletar, father of Mike, stood with the building’s owner Jim and said “looks like that’s it” with no more space to paint. But Jim’s response didn’t mirror John’s. “He said, ‘I do have the back yard and it’s available for you to do anything you want with it.’”

The result is Patriots Park – a three panel 68-foot long and eight feet tall sandstone wall with 11 patriotic and military-themed paintings painted by local artists that are interchangeable. The wall was dedicated on Veterans Day in 2021.

“When we finished the four paintings on the wall and we were offered to add on that option in the back I thought, ‘I don’t have to stop here if I have this opportunity to continue what we started.’ That was the driving force for me to follow through to support our men and women coming back from overseas,” said John, a member of American Legion Post 118 in Amherst, who gives credit to the concept of an outdoor gallery wall to his wife, Cathy. “It’s a revolving outdoor gallery. I think that we have something that’s extraordinary.”

On Sunday, Nov. 20, a new set of paintings was unveiled at Patriots Park during a rain delayed Veterans Day ceremony. Before the unveiling, attendees heard from two sisters, retired Navy Capt. Carol Shinsky and retired Navy Chief Warrant Officer W3 Gail Shinsky, along with a video address on the jumbotron from country music singer-songwriter Lee Greenwood and a performance by him of “God Bless the USA.”

“I think we can all agree that the Veteran’s Mural Association to preserve history and promote the arts has been accomplished,” Greenwood said. “Patriots Park is one of a kind.”

The 11 paintings were covered with a black tarp to be revealed one by one with the artist and the painting’s sponsor standing next to them. Mike painted two, with one that honored his mother’s U.S. and Canadian military family history.

“It was a touching one to work on since it’s family,” Mike said. “I think (Patriots Park) is a unique way to present patriotic artwork. We have other artists involved now; it’s good to have local talent and showcase their abilities as well and represent families that have sponsored the paintings.” Together, Patriots Park and Veterans Wall is “a staple in the city.”

Shannon painted Simone off his Air Force graduation photo and added in P-38 planes. “It’s the coolest thing ever to be a part of,” he said. “I get to see all of these veterans; see them appreciate us like we appreciate them. It’s the most gratifying thing I’ve ever been a part of really. (Patriots Park and the Veterans Mural is) emotional for a lot of people. It’s just amazing to be a part of.”

The sponsors will receive their painting prior to new ones going up next Veterans Day. All 11 paintings for 2023 are spoken for and the Veteran’s Mural Association is now looking into 2024.

“It took on a life of its own. I’m proud of this,” Cathy said. “It’s special, and we pulled in lots of new artists and that part is really cool. It’s really a community project.”

Patriots Park is made possible through community donations, both monetary and in-kind,

“It means everything to have the community behind you,” said John, a U.S. Navy Vietnam War veteran who has committed himself to ensuring today’s veterans feel welcomed home. “It’s a community project that’s really stirring to realize that the community is standing behind you on what you’re trying to accomplish. Ultimately what we are trying to do is make it a destination point in the City of Amherst. And make Amherst, Ohio, a destination point to visit Patriots Park.”