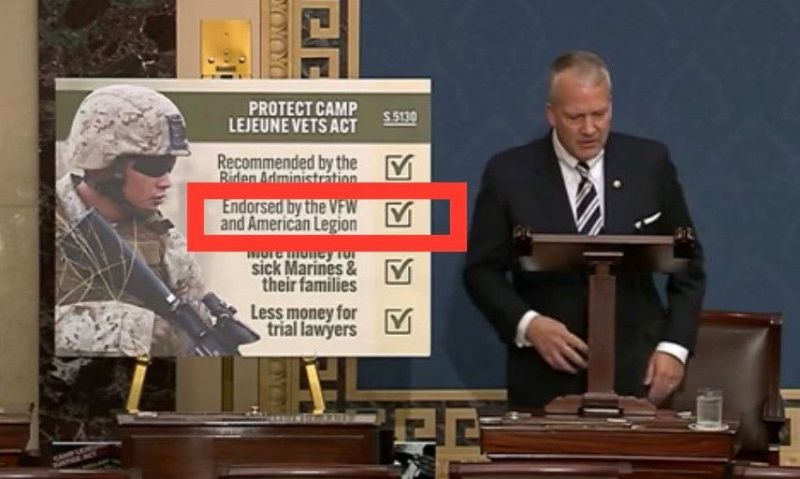 On Nov. 17, U.S. Sen. Dan Sullivan introduced American Legion-supported legislation that would cap the fees trial lawyers can charge in cases representing sick Marines and other individuals impacted by water contamination at Marine Corps Base Camp Lejeune in North Carolina. Less than two weeks later, on Nov. 30, Sullivan made a motion for unanimous consent for his newly introduced bill. S. 5130, the Protect Camp Lejeune Victims Ensnared by Trial-lawyers’ Scams (VETS) Act, amends the Camp Lejeune Justice Act and caps legal fees at a maximum of 10% and ensures that attorneys are not paid before a veteran or family member as a result of any award made.

Sullivan, a member of American Legion Post 28 in Anchorage, called for unanimous consent for the legislation and cited specific American Legion support for it. He quoted directly from Resolution 15: Oversight of Camp Lejeune Justice Act, which was passed by The American Legion National Executive Committee during its 2022 Fall Meetings, reading, “Whereas, predatory law firms charging exorbitant fees have engaged in aggressive marketing campaigns …  The American Legion urges Congress to provide the necessary oversight during the implementation of the Camp Lejeune Justice Act to ensure veterans receive fair consideration of their lawsuits and protections against predatory law firms.”

In a press release issued prior to Sullivan’s remarks, Chanin Nuntavong – executive director of government affairs for The American Legion – also expressed the organization’s support for the bill. “With the passage of the Camp Lejeune Justice Act, veterans and their families were finally able to pursue legal action against the government for their exposure to toxic contaminated water at Camp Lejeune,” he said. “After decades of waiting, and suffering the realities of life-threatening medical conditions, they were bombarded by advertisements from unscrupulous law firms charging exorbitant fees. We commend Sen. Sullivan for correcting this injustice by introducing legislation that caps legal fees at a reasonable amount to ensure our veterans and their families are not taken advantage of.”

The American Legion submitted congressional testimony to the Senate Veterans Affairs Committee in mid-November during a hearing on PACT Act oversight that called for the capping of legal fees on Camp Lejeune Justice Act cases.

Top legislative priorities of The American Legion for the 118th Congress.
VIEW AGENDA

This booklet explains the importance of legislation to the Legion’s programs, why it is necessary for members of The American Legion family to lend individual support when requested, and how to know when to offer support.
VIEW HANDBOOK