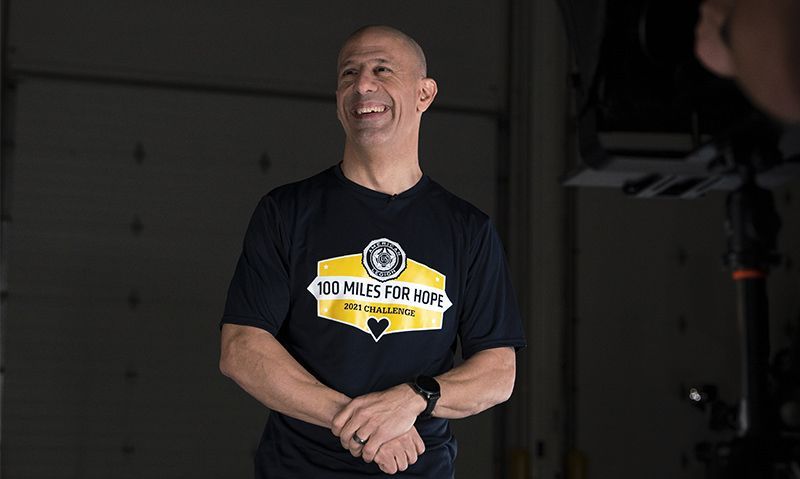 When Tony Kanaan isn’t driving a race car, he may very well be running, cycling or swimming.

Kanaan, who won the Indy 500 in 2013, will be driving The American Legion sponsored 48 car during the INDYCAR series. In May, he will return to Indy where he will guide the red, white and blue American Legion car around the famous track.

Kanaan has also completed the signature race in his other sport, finishing the Ironman Triathlon at Kona.

“Winning Indy obviously was my life dream, my childhood dream,” he says. “When you go race a car, you are depending on the equipment, on a team, on so many things that need to go right. When you're talking about an Ironman, you have no excuses. If you do bad, it's on you. Right? To me, the feeling when I crossed the finish line was very different than when I won the 500. I'm not saying it was more or less satisfying, but it was different because that was an achievement that I did on my own. My engine guy didn't have to do anything or my mechanic. It was me. Finally, I did something just me that I didn't rely on anybody else to do it. I would say it was satisfying as winning the 500.”

This October Kanaan will return to Kona, 10 years after completing his first and only Ironman to date.

“I'm training quite a bit for that, trying to, obviously, fit into my schedule with all the other things I have to do,” he said. “After I did the first one, I said I was never going to do it again because it was on my bucket list, and now I've done it. But as slow down a little bit on the INDYCAR side, I have more time to train so I'm going to do it.”

As part of his training, Kanaan has jumped into The American Legion 100 Miles for Hope challenge. The campaign, which runs until Sept. 6, challenges participants to log at least 100 fitness or wellness activities of at least 30 minutes. At the same time, all registration fees, purchases of celebratory merchandise and donations go toward The American Legion Veterans & Children Foundation.

Learn more about joining Kanaan on his journey, the two options for registering and more about 100 Miles for Hope by clicking this link.

Whether waiting at the start line at an oval track or on a beach in Hawaii, Kanaan looks forward to racing.

“The toughest part is the training,” he says. “The race, it's the easiest part. I wanted to get into the 100 mile challenge that we're doing because you can find excuses not to train. Look how busy I am with everything else and I still find the time. I'm not saying I'm going to be the fastest guy out there. Not even close to be in the top five guys in my age group, but that's not the point. It’s about finding the time to train and to do something healthy. So the challenge is there and I love it. I can't wait.”

Kanaan started swimming as a youth to build up his shoulders so he could handle the rigors of holding the steering wheel during his early races. As a kid, he already had a bike and quickly found a love of running.

A coach took note and encouraged Kanaan, who was 17 at the time, to try a triathlon.

“That was 30 years ago, triathlon has been in my life,” says Kanaan, who trains between two and four hours a day. “I love running. That became part of my daily routine and now it's a way of living. The triathlon has been part of my regimen to be able to be fit for the race car. I'm not saying you have to be a triathlete to become a race car driver or vice versa, but you need to be fit to be a race car driver.”

A half Ironman is a 1.2-mile swim, then a 56-mile bike ride and then a half marathon, 13.1 miles. A full Ironman would be double each of those distances.

The training builds more than just strength and cardio. It boosts his mental toughness.

“For a normal guy like me, it will take me a lot longer than an INDYCAR race,” he says. “So, basically, going through those struggles, especially in a sport that I don't dominate, right? Because that's not what I do for a living. It makes my mind stronger. When I'm having a hard time in a two-hour INDYCAR race, it's actually not as bad when I'm running my 26.2 miles. The training gets my mind trained to support the heat, the stress and everything else, because you're talking about driving up to 120 miles an hour, pulling five Gs into the corner and the heat and the stress and passing cars, having cars running this close to you. So I use a lot to train my mind.”

It's pretty certain that Kanaan will be the only 100 Miles participant who will also be competing at the Indy 500. But literally anyone can participate in the challenge by walking, cycling, doing yoga, riding a motorcycle or even gardening.