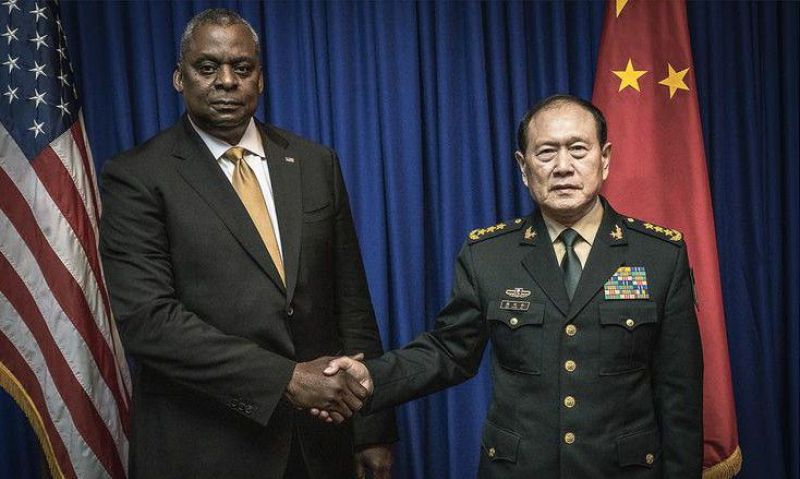 U.S. Secretary of Defense Lloyd Austin told China’s military leader Tuesday that there needs to be open communication between Washington and Beijing to avoid conflict at a time of rising tension in the Indo-Pacific region.

Austin expressed his concerns at a meeting with Chinese defense minister Gen. Wei Fenghe at a meeting of defense chiefs from Asia and elsewhere in Seam Reap, Cambodia.

During the meeting with Wei, Austin “raised concerns about the increasingly dangerous behavior demonstrated by [Chinese] aircraft in the Indo-Pacific region that increases the risk of an accident,” Ryder said. “The secretary also affirmed that the United States will continue to fly, sail and operate wherever international law allows.”

Austin arrived Monday in Cambodia after a visit to Indonesia as part of a week-long foreign trip that also took him to Canada. Austin’s meeting with Wei on Tuesday was the second time the two have met in the past six months.

Relations between Washington and Beijing have been on the decline for years and took a sharp turn downward when former President Donald Trump began a costly trade war almost five years ago.

Western leaders have expressed serious concern about Beijing’s rising influence in the Indo-Pacific, a vast region that stretches from the Pacific Ocean to the eastern coastline of Africa and includes countries such as China, Taiwan, Japan, South Korea, Indonesia and the Philippines.

Part of the concern is China’s ongoing claim of sovereignty over Taiwan, which it considers a breakaway territory.

“The secretary reaffirmed the importance of peace and stability across the [Taiwan] Strait,” the department said in a statement. “He underscored his opposition to unilateral changes to the status quo and called on [China] to refrain from further destabilizing actions toward Taiwan.”

Austin will attend the 9th ASEAN Defense Ministers’ Meeting-Plus in Cambodia on Wednesday before returning to the United States. Last year, Austin attended the meeting remotely due to COVID-19 concerns.