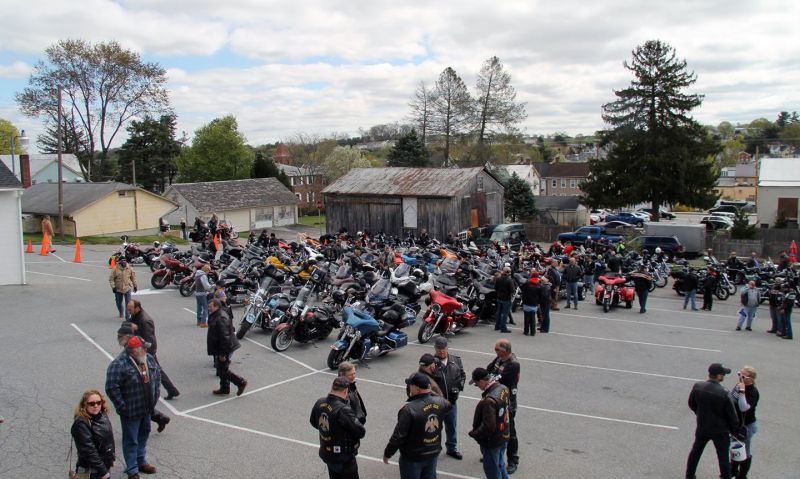 American Legion Riders Chapter 403 in Glen Rock, Pa., has only been in existence for a few years, but it’s already made a positive impact on its community. That chapter staged a canned food drive for a veteran awaiting benefits and in need of three weeks’ worth of groceries and teamed up with the Veterans of Foreign Wars to deliver a wheelchair to another veteran.

And when Post 403 was planning on paying for landscaping on the post property, members of Chapter 403 volunteered to do the work themselves to save the post the cost of hiring someone for the job.

Department of Pennsylvania American Legion Riders Assistant Director Phil Campbell said what Chapter 403 has done in a short period of time “is what we do” as Legion Riders. That’s one of the reasons Campbell wanted to promote a recent Chapter 403 effort on Legiontown.

In April, Chapter 403 was asked to assist New Freedom VFW Post 7012 in an effort to raise funds for Southern Regional Police Sgt. Dan Teague, a Marine Corps veteran who is battling cancer.

Teague is the area’s only motorcycle officer, and VFW Post 7012 wanted to stage a fundraising motorcycle ride to assist Teague with his medical bills. But the VFW post doesn’t have a riders group, and a dual member of both 7012 and 403 approached his fellow American Legion Riders about helping out.

“(Chapter 403) said ‘Phil, do you think it’s a good idea?’ I said ‘hey, go for it. Just clear it with your post commander,” said Campbell, who also serves as the state’s ALR Region 7 director in which Chapter 403 is a part. “Sgt. Teague is well-known in the area. He’s led a lot of our rides in that area. Our Legion guys know him.”

Campbell said Chapter 403 handled the logistics of the ride, developing a route and coordinating assistance with local law enforcement and first responders, which allowed Post 7012 to focus on other aspects of the fundraiser.

Campbell, who is the Sons of The American Legion vice chairman at Burt J. Asper American Legion Post 46 said Post 7012 was hoping to get around 50 motorcyclists to take part in the fundraiser, but Chapter 403 was able to get nearly 200 to participate. The result: the "Sgt. Teague Strong” ride resulted in nearly an $8,000 donation for Teague and his family.

“Our guys are great for jumping in. If it’s a veteran, they’re going to help that veteran,” Campbell said. “These guys, they’ve only been around three or four years, but they’re always willing to step up and help somebody out. I wanted to give these guys a boost so the people know what they’re really out there doing.”

Campbell said Chapter 403’s efforts have provided stellar public relations for The American Legion. “I tell these guys that ‘you are the face of The American Legion when you’re Riders.’ They’re going to see that big patch on your back,” he said. “When you do something great, everybody’s going to remember you.”