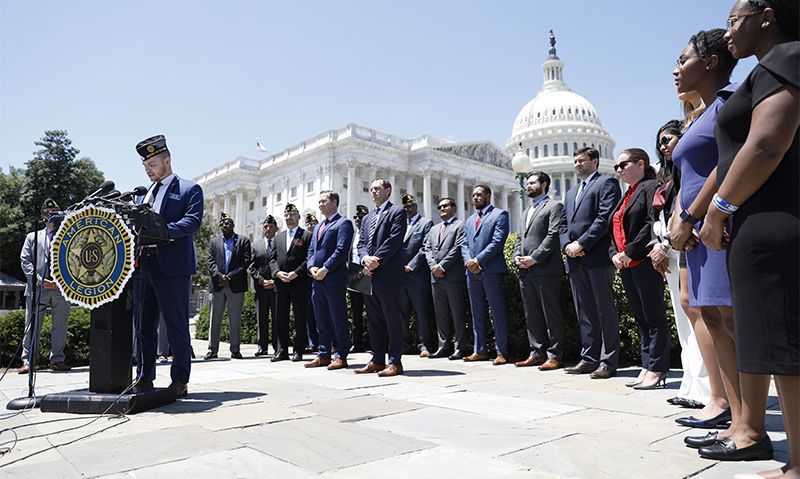 As the withdrawal date for U.S. troops from Afghanistan looms, 18,000 Afghan interpreters awaiting Special Immigrant Visas (SIV) face a grim future. They — along with their families — are being hunted by the Taliban as the militant group attacks regions that have been under the control of the Afghan government.

There are less than 100 days until the Sept. 11 withdrawal deadline, however it’s likely the last American servicemember will leave Afghanistan earlier.

U.S. Reps. Mike Waltz, R-Fla., and Jason Crow, D-Colo., joined The American Legion on Capitol Hill on June 16 to demand the U.S. government act immediately to evacuate the Afghans who assisted U.S. troops. These Afghan allies served alongside American forces at great risk to themselves and their families. In exchange for their service, they were promised a pathway to a future in the United States. By not honoring this promise, the U.S. government is signing their death warrants.

Nick Riffel, a policy adviser for The American Legion’s National Security Division, served two tours during the deadliest years of war in Afghanistan. From 2009 to 2011, he served with 1st Battalion, 6th Marines as a designated marksman and infantry team leader.

“During my time in country, I saw many interpreters come and go,” he said. “Some fled, others were abducted, and many were killed while serving with me and other American troops in combat.

“They left behind friends and family not knowing if they could ever return in search of a better life once they helped Americans and coalition forces.”

Riffel recalled how many Afghan allies would wear face masks to conceal their identity because they feared retaliation from the Taliban that could lead to the deaths of their loved ones.

“Many Afghan interpreters served honorably for more than 24 months with their lives in imminent danger alongside frontline combat troops,” he said. “One of which I served with from 2009 to 2010. He was killed in 2013, with pictures of his dead body posted to his Facebook.”

He was awaiting his visa at the time of his death.

“We cannot hesitate to pull out all of our interpreters that meet the requirements for the Special Immigrant Visas,” Riffel said. “We strongly encourage the U.S. government to fulfill their obligation to our heroic Afghan interpreters by keeping our Afghan allies safe.”

Crow served in the U.S. Army as a paratrooper and an Army Ranger, serving three combat tours in Iraq and Afghanistan. He said he owes a debt of gratitude to the Afghan men and women who served alongside him.

“It’s not an exaggeration for me to say that I may not be here today, standing in front of you,” Crow said, “had it not been for brave Afghan and Iraqi interpreters who stood by me, fought with me shoulder to shoulder, warned me of risks, and helped us get our mission done.”

He called the urgent evacuation of Afghan interpreters a “moral imperative.”

“For that to happen, people need to know that the American handshake matters, that we will stand by them through thick and thin. We will have future conflicts and adversaries. And those future partners are watching now how we treat our current ones.”

For Crow and others who have served alongside these men and women, it’s personal.

“The 18,000 Afghans that are waiting in line … for us, the numbers have names. They have faces. And they have families.”

Waltz served multiple combat tours in Afghanistan as a Green Beret. He called out the president and his administration for not acting immediately.

“Like my friend and colleague, Jason Crow, I would likely not be here if it had not been for the actions of a brave interpreter that stood with me in combat, shoulder to shoulder against the Taliban.”

They risked their lives and their families’ lives to stand against extremism and serve alongside American forces, he added.

“How many future Afghan families, how many great American contributions will we not have if President Biden doesn’t act, and doesn’t act now,” said Waltz. “If he does not act and does not get these people out, blood with be on his hands and his administration’s hands.”

“The time for talk and debate is over. The Defense Department is accelerating its withdrawal and plans to be out far sooner than September 11. We are closing our only air base in just a few weeks,” Waltz added. “We have a moral and national security obligation to get these people out. Evacuate them now. We’ve done it before, and we can do it again.”